Prof. Dr. Carsten Fichter, you have been supervising the research and development department at wpd windmanager for several years. What role does this area play for companies? And why is it becoming increasingly important?

CF: Generally speaking, every company is initially focused on its day-to-day business. This is where the daily money is earned. You have certain products or services that keep the turnover going. Then there are other products and services for which the demand decreases due to technical developments. Other new developments are added. At wpd windmanager the core business is operations management. But of course you have to look beyond that and see how the market develops. Now, for example, a new product, a new service, is being added with the demand-oriented night marking.

„Stand out from the competition through research and development.“

But as a company, you naturally have to look further ahead. What will happen in the next few years? How can I further stand out from the competition and expand my market position? What do I have to do as an employer to be more attractive to new employees? How will business management and the market develop further? What other additional services can I offer? We at wpd windmanager deal with such questions.

Which projects is wpd windmanager researching, for example?

CF: There is a very broad spectrum. In the GoodWind project, for example, we are researching together with Deutsche Windtechnik and Nordwest Assekuranz how we can make optimum use of synergies between operations management, service and insurance and jointly reduce running costs. Another major research project is called PiB – „Prädikative intelligente Betriebsführung“ (Predictive Intelligent Operations Management). This is all about reducing the icing risk. We are dealing with the marketing of old plants or the moisture monitoring of transformers in the plants. Also we analyse maintenance concepts, evaluate bat shutdowns or work on a model to determine tender offers. We also deal with topics such as virtual reality or artificial intelligence and how such technologies could facilitate field service inspections. 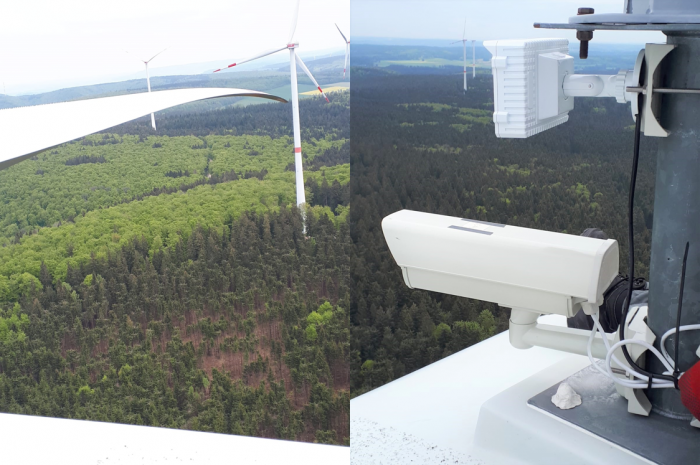 Research and Development: In the PiB research project, a camera system was implemented on a nacelle to verify the BladeControl ice detection system installed here.

How is a concrete research project developed?

CF: There are different approaches. Often the projects arise from the daily business of the operational management. It starts with a problem for which there is no solution on the market yet. Of course, we depend enormously on the hints of our colleagues, who then pass them on to their department managers. These suggestions are collected and we meet regularly with the managing directors and coordinate the further procedure. If we want to work out a topic, I then check whether and which student has the right profile for the topic.

In the meantime, however, there are also many projects where other companies or institutions – such as the Fraunhofer Institute, BIBA or TÜV Rheinland – want to involve us as project partners. In the past, such research projects were often handled by the plant manufacturers. However, due to our large and especially heterogeneous fleet, wpd windmanager has become more attractive as a partner for such projects, because the operating experience is not limited to just one turbine manufacturer.

And how is the process then carried out – from the initial demand to the research project and, in the best case, even to a concrete service?

CF: That is also very different. As already mentioned, it starts with a demand or an idea. This is collected and in the next step it is elaborated accordingly. It is not possible to sketch such a process in a generalized way. It always depends on the respective project. And after the project has been carried out, we focus on the actual realization. We do the preliminary work with the students and the research projects. The next step is then to decide how quickly and which project can be implemented. Of course, this also varies depending on the project and urgency.

But: The result does not always have to be a concrete service. Sometimes the result of such a work is that a topic is not pursued further. For example, there was once the idea of offering the operation of measuring points at the feed-in point of WTGs, where the plants feed the electricity into the grid, as a service. We pursued this approach in a final thesis. In the end, however, it turned out that such a service required too much work at the time and was therefore not economical. Such a finding is, however, as valuable as a new service because it saves unnecessary costs and helps to focus on other developments.

Finally, perhaps a basic assessment. How do you see other wind energy companies positioned in this sector?

CF: The topic has been very neglected so far. Not only in the wind energy sector. From my point of view there is a lot of potential lying fallow. On the one hand, there is a discussion about shortage of skilled workers, recruiting and innovations. On the other hand, however, companies are not willing to invest time and money to push such topics sustainably. Sometimes there is a lack of resources. Often, however, there is simply a lack of patience, because such an approach is naturally designed for the long term.

However, if you look at the development at wpd windmanager, you can see that it pays off – both in terms of the early integration of junior staff into the company and in the increase in innovative strength and further development of services. In the meantime, we have already supervised 28 final theses at wpd windmanager since 2016 and have already been able to retain 14 students as permanent employees in the wpd world. In addition, with the „Refreshment Wind Energy“ project, we have created a further development tool for employees that is geared to specific knowledge requirements and raises the level of knowledge within the company. Not every company is as active in the field of research and development in wind energy. wpd windmanager is right at the forefront of this.